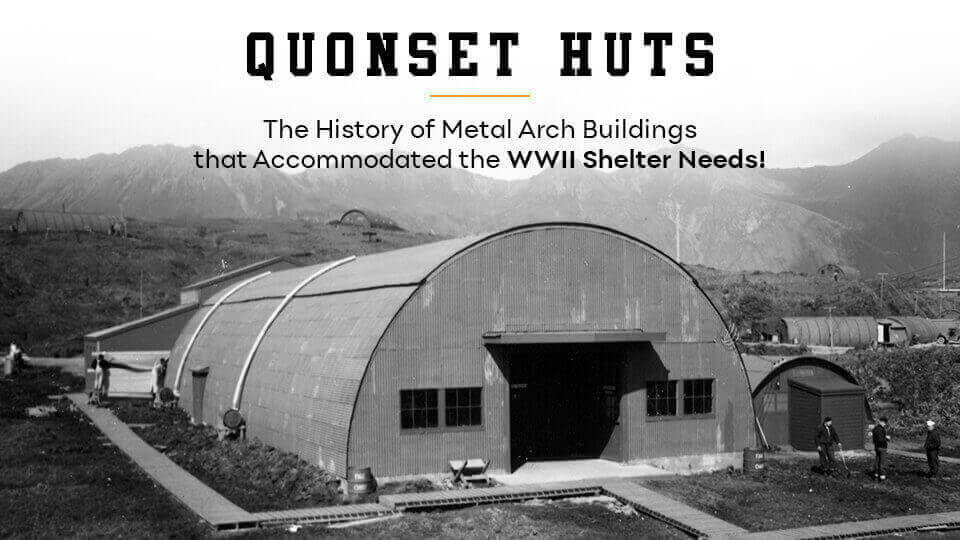 World War and the Shelter Problem

The two ferocious World Wars were fought among the several big and small nations during the 1900s. The period saw various revolutionary inventions. The soldiers fighting the battles for their nations were constantly living in the unsafe bombing and shelling, open to many infections due to war injuries and deaths. Despite the battling countries, they had some other enemies around them like mud, slime, and disease. Lot of them feared the shellfire lesser, than these, to take their lives.

Understanding the living needs, the authorities were constantly innovating the ways for bettering the lives of both soldiers and civilians. It was during World War I, that Nissen Hut was invented as a shelter solution, and later during World War II, it was transformed into a better design by Davisville Naval Construction Battalion Center at Quonset Point, Rhode Island. Nissen huts were semi-cylindrical designs that were transformed to the larger size of 16’x36’ to provide more space and were mounted on 4’ side walls to provide better usable spaces to the people.

Quonset Huts Started Being a Part of Life

With the better-reformed designs of the Metal Arch Buildings, soon they started gaining popularity as a part of necessary shelter solution. From comfortable beds to fancy sinks, washrooms to cultured latrines, everything was brought inside the structure.

People used these Metal Arch Buildings for several purposes such as storing their cattle and livestock. Keeping the hay and grains. Parking cars and boats. These were so popular and used widely as barracks, churches, offices, shops, manufacturing plants, camps, and even homes.

The features that appealed everyone!

These structures had some salient features that made these popular and people accepted them rapidly.

The History and Evolution of Quonset Huts

With time these designs were changed differently, let’s have a look at the journey of transformation of Quonset huts into others:

This was the most basic iteration of the original Nissen Hut. The earliest transformation in the Nissen Hut structure was the addition of wallboards. Those made of Masonite at the interior and were mounted with corrugated metal panels at exterior.

This metal arch building was developed at George A. Fuller Company at West Davisville, Rhode Island. This designed drastically lowered the prices upto sixty percent making the lighter by thirty-five percent. The wallboards were made of 4’ and it assembled in two sections (unlike three sections earlier). Proving to be greatly time and cost saving.

The Quonset huts were built with wood and the earliest structure was designed and built by the James Manufacturing Company of Fort Atkinson, Wisconsin. The structure served the Arctic weather conditions best. All facilities were installed to make the conventional metal arch buildings more comfortable, portable and affordable.

This metal arch building was a Canadian version with wooden work. The structure although was prominently more Quonset-like. These were popular around Alaska Highway and Canol pipeline. Tar paper and plywood are just some of the few other materials used in these structures.

Emkay manufactured metal arch buildings with laminated wood ribs. This provided a better and cultured look to the metal arch buildings. This was used to safeguard their crew working on war fronts for military constructions. These were completely wooden resembling of a chicken shed.

The Armco Huts were made with 8- to 14-gauge heavy iron and were suitable enough to be buried up to 6 feet under dirt. These Quonset hut kits served as ammunition warehouse, soldier shelters, and safety bunkers. They often rested on earth-retaining structures such as culverts and storm sewers.

This metal arch building is simply the giant Quonset Hut. The bigger size made it popular as “Elephant Hut”. The adaptations while its evolution made it great for tropical climates. Larger in size, these metal arch buildings served well enough for several commercial purposes.

These Metal Arch Buildings were similar to Utility Building. The difference was that this design allowed for expansion in both directions. The larger spans were introduced to make them usable for multiple purposes.

Quonset huts are still popular to use among a lot of people worldwide. Call us to get a price on a Powerbilt Steel Arch Building today.

The superiority of steel arch buildings

GET A FREE QUOTE

20 Years of Warranty*
Fill Out Your Requirements & Get Exclusive Offers