Know the Real Differences Between Nissen Huts and Quonset Huts 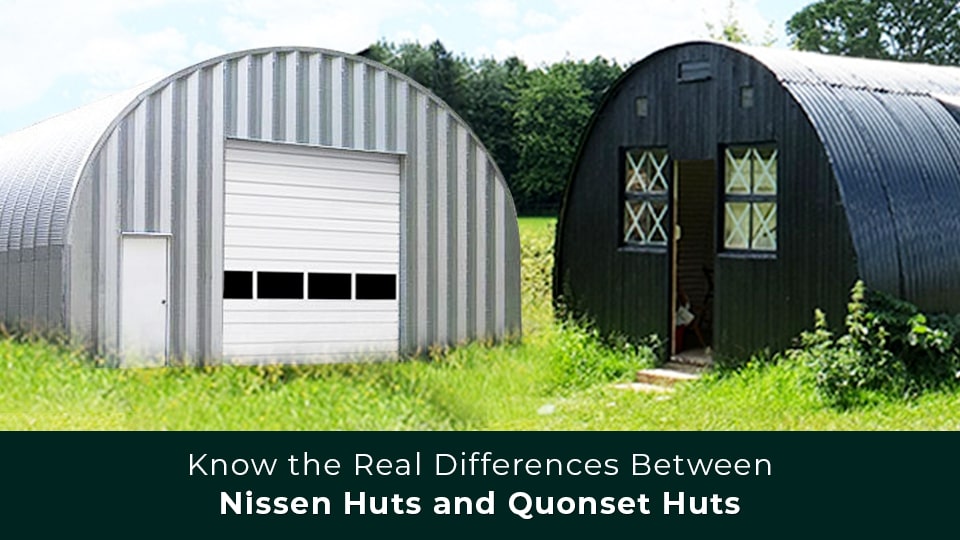 Nissen and Quonset huts add usable, practical space to your property, offering a unique aesthetic compared to traditional storage buildings with unrivaled utility. If you are not familiar with them, they are historically popular dome-shaped metal buildings. These types of facilities are incredibly long-lasting and can even withstand extreme weather conditions. The best thing about them is that you can use these buildings for almost anything!

Nissen huts and Quonset huts are similar in style and design; however, they have some essential differences between them that may make one much more suitable for your purposes than the other.

Although the Nissen huts and Quonset huts are very similar in some ways, they each have features that make them work a little better in some situations than others. Here are some of the main differences you will notice between the two types of huts:

Both Nissen and Quonset huts are still used today because of their design’s versatility and ease. They are cost-effective enough that they are used by militaries and governments worldwide for large scale operations. They even are employed by institutions and schools for use, as well as by private citizens.

Investing in a Nissen Hut or Quonset Hut

Both the Nissen hut and the Quonset hut are a terrific investment because they will enhance your property’s value while also giving you additional usable space. They are very cost-effective and will provide you with value for the long term.

The Nissen hut was developed during a time of war and had a long, storied history. The design features that made it excellent for military use have made it great for private and commercial use. Mostly unchanged, you will still see many Nissen huts in use today.

§ History of the Nissen Hut

The Nissen Hut was developed by Major Peter Norman Nissen, an engineer in the British Army, in 1916. It took him three prototypes to perfect his design, and it went to production in August of the year. Nissen received royalties for those sold not during a time of war, but then waived his patent during WWII to allow for a less disruptive production of the tent during the war.

The design of the Nissen hut was influenced by the wartime needs of the British military. They needed more storage, and that storage needed to be easy to install and portable. Because of shortages, they also had to be economical. The Nissen was all of these things and became wildly popular in use during both WWI and WWII.

One of the best features of the design of the Nissen hut is its ease of construction. Its frame goes up rapidly and is then fitted with sheet metal. In general, a crew of a half dozen can build the building in an afternoon.

The Quonset Hut is based on the Nissen Hut design and was also developed during wartime. Like the Nissen, its features, such as ease of construction and durability, make it a private and commercial favorite in metal buildings to this day!

§ Invention of the Quonset Hut

No one knows who exactly invented the Quonset hut, but The George Fuller Company originally manufactured it for the United States military in 1941. It was based on the Nissen style of hut, but it is easier to construct and expand upon, making it even more versatile while still tough enough to endure military use.

§ U.S. Navy Use of Quonset Huts

A lightweight, all-purpose building, the Quonset hut is easy to ship and easy to install. That made it perfect for naval usage during WWII. The buildings have great features, such as a clear span of space with no framing or support columns getting in the way, they are super strong and durable, and they come in prefabricated kits making assembly quick and straightforward.

The Quonset hut is named for the Davisville Naval Construction Battalion Center at Quonset Point, Rhode Island, because this is where it was built for the first time. This is also a significant location for the United States Navy because it is strategic to shipping, especially during wartimes.

§ What are Steel Quonset Huts Made of?

This type of building could be made of any material, but it must be made of steel to be useful for the military and various applications. It is a steel building that is strong and durable while also having other great features of its design. Only steel will be able to withstand the bad weather, natural disaster, and even war.

Quonset buildings last for decades. Their longevity is a big part of what makes them so cost-effective and desirable. Being made of such a strong material and having a unique dome-shaped design makes these huts capable of lasting a lifetime. Steel Quonset huts are guaranteed to last for over 40 years!

Quonset huts remain popular today because of the great design features and durability. While the durability and ease of installation have not changed, the design has evolved somewhat. The buildings come in more specialized shapes now, allowing for different costs and providing better options for various snow loads and wind speeds.

The experts at Powerbilt Steel Buildings can help you decide which style will work best on your property and suit your needs. They offer the highest quality steel structures with unrivaled customer service at the most affordable Quonset hut prices available. Call them today at +1 (800) 547-8335 for a quote and additional information!

Why are Quonset Huts Great for the Southeast?

GET A FREE QUOTE

20 Years of Warranty*
Fill Out Your Requirements & Get Exclusive Offers